As You probably know Visual Studio has integrated git client. It is really cool thing. Unfortunately there is a big BUT: it does not support git over ssh.

So in 99% cases I use separate console window to push my stuff to remote repository. But not anymore :)

Package manager console to the rescue

The easiest way (in my opinion of course) is to use Package Manager Console is a PowerShell console :)
The only difference is that it has separate profile file form standard PowerShell.

The effect in PowerShell: 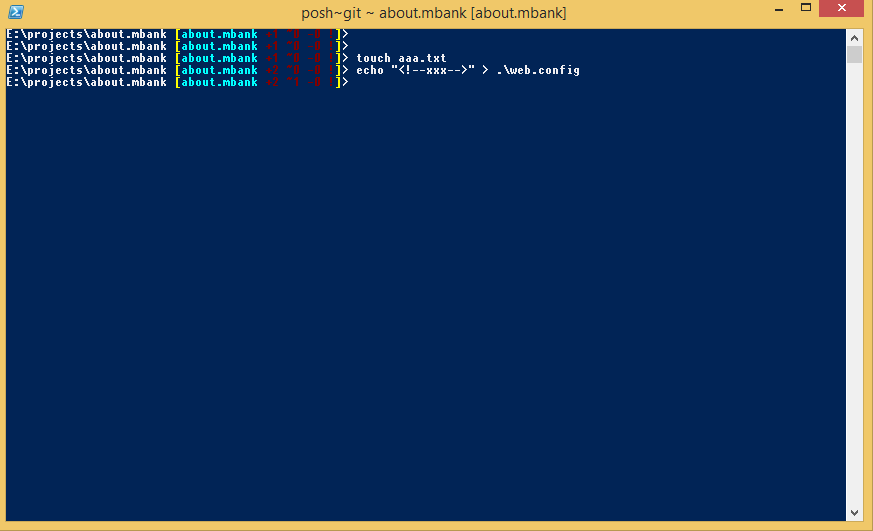 hich gives you all needed information with colors and numbers about your local git repository: how many new files, how many changes, is you repository behind/after origin, etc.

and add line like below. Iit depends on how you installed poshgit - you can find it in normal powershell profile with typing in in notepad $PROFILE

Reload profile with . $PROFILE or just restar Visual Studio. Now I am ready to work:

Developer, engineer, craftsmen, speaker & biker. User of all useful technologies. Believe in people not papers. DevOps & automation adept. In love with web technologies. I speak here for myself only.

Previous post HSTS error in Google Chrome Sometimes, specially after using Fiddler, my Google Chrome shows me HSTS error like below: localhost normally uses encryption to…
Next post Run sudo in Windows It is really frustrating when you need UAC to run one command. You are doing you stuff and you…