You open a file, change one line, press save and the file has changed its structure. But you add only a simple comma, variable or if. How could this happen to me again?

IDE vs style vs developers

Today we use different IDE and notepads in teams. Moreover, I’m sure that you have more than one text editor installed. And most of them have syntax helpers and code formatters.

Tool to the rescue

There is a nice tool that helps developers configure and enforce formatting and code style. It is EditorConfig. Using a plain file .editorconfig we can enforce for example:

Editor Config has a really wide support. It will work without plugin in JetBrains tools (InteliJ, WebStorm, PHPStorm, …), Github and TortoiseGit. Moreover, there is a plugin for almost every IDE like NetBrains, Eclipse, Emacs, Atom, Sublime, Notepad++, Visual Studio Code and older versions of Visual Studio.

All options are described on .NET Code Style Settings For EditorConfig. What’s more? We can specify a severity for every option: none, suggestion, warning, or error. 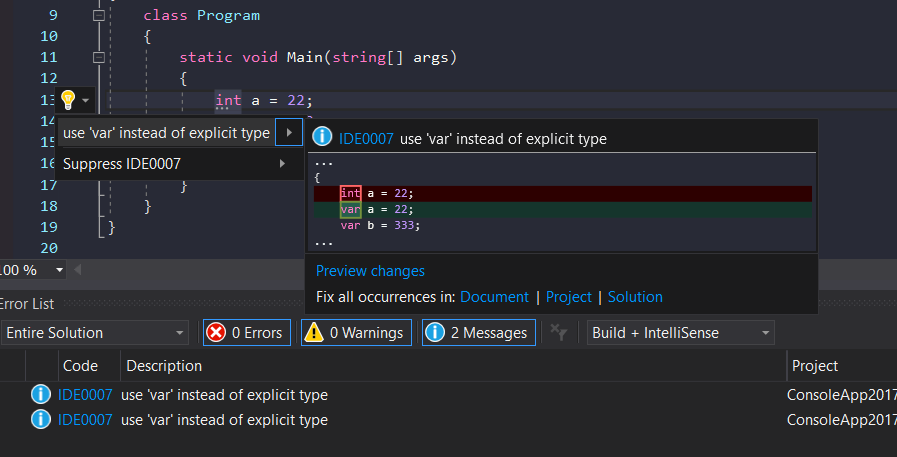 ##
Common code format is better, it makes it more readable. But the most important reason is much simpler. Using common formatting and code style has one big advantage. There aren’t commits with formatting only. And all changes can be small. The last thing. Do you want to code with the same code format as Microsoft developers? Yes we can! The Roslyn Editor Config file is available on Github, so we can use it in our projects.

ReAttach - how to easily (re)attach the debugger in Visual Studio

Your Integrated Development Environment(IDE) is Your main tool. Anything that can make it better is worth of trying :) Nowadays we are using usually more than one IDE. For example Visual Studio for...

Do I need a lawyer to develop software?